The Viking Festival has fast become one of Sheringham’s favourite events – but how did it start? 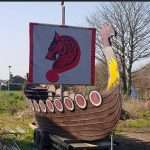 Like many of Sheringham’s projects the inspiration for the Viking Festival came from the ever productive power house brain of Colin Seal – and friends – chatting over a few beers and rhapsodising ‘that it would be nice to have a raging fire on the beach in the darkest part of winter’. This idea quickly grew and with Sheringham Carnival support it was deemed feasible.

Decisions were quickly made; the first Sheringham Viking Festival of Scira was scheduled for 22nd and 23rd February 2014.

With legalities ironed out and permissions acquired from The Powers That Be, the hard work could begin. First practical challenge; how do you actually build a Viking Longboat? Calls went out via for volunteers to get involved and luckily Brian Howe’s expertise proved invaluable; the first incarnation of the Viking vessel was constructed in the garden of The Lobster Inn.

From the very beginning the festival has been lucky to have the support of Wuffa, a Viking and Saxon Re-enactment Society based in Suffolk. Their skills and enthusiasm lend the festival an authenticity it would otherwise be hard to achieve. The festival has grown to such an extent that Wuffa have commandeered a larger site for their settlement. Beeston Common provides a larger battle area and is about a half mile east of Sheringham. When you walk through the camp you will not only witness their fearsome fighting but you will get an insight into the Viking way of life as you observe cooking, blacksmithing, tailoring, making music and much more.

All Colin’s projects are community focussed; aiming to involve people from all reaches of the community, to learn and have fun together, through art. It is a bonus if that community, or a good cause, can also benefit in other ways. Sheringham Viking Festival took a ‘sinister’ turn in 2017 when Colin rallied a group of sixth formers from Sheringham Woodfields School to acquire supplies for Cromer and District Foodbank. Armed with swords and shields they’d made at a previous workshop they dressed in
Viking attire, organised an invasion on a local supermarket, kidnapped the manager and demanded the ransom of a trolleyful of foodbank items. The invasion was deemed a success.

Prior to Covid The Viking Festival was going from strength to strength with more workshops arranged for children, artisans travelling from far flung reaches of Scandinavia to demonstrate traditional Nordic skills. In 2019 Greta Lynggaard was keen to be involved and journeyed from her native Denmark to demonstrate how Vikings gathered and spun the rare fleece of wild musk oxen into a highly prized wool.

Who knows the impact of the forced two year break? People want to be involved in demonstrations and workshops, more want to come and spectate. It continues to be an expanding and evolving event.
Let’s see where the future takes us

To find out more about the early days of the festival visit: https://www.facebook.com/scirafestival

Sheringham’s famous Shantymen will be performing a concert to raise money for the Ukraine Disaster Emergency Committee Appeal. It will take place on Saturday 26th March at St Peter’s Church, beginning at 7.30pm.

Michael Gurney DL, High Sheriff of Norfolk, and North Norfolk’s MP Duncan Baker will be attending to lend their support too!

Admission is free, with a retiring collection (cash or card). Please do come along and support the fundraising and the music!

© 2023 Sheringham Carnival. Made with by Eastworks